Posted at 10:02h in Investment Markets News by Stuart 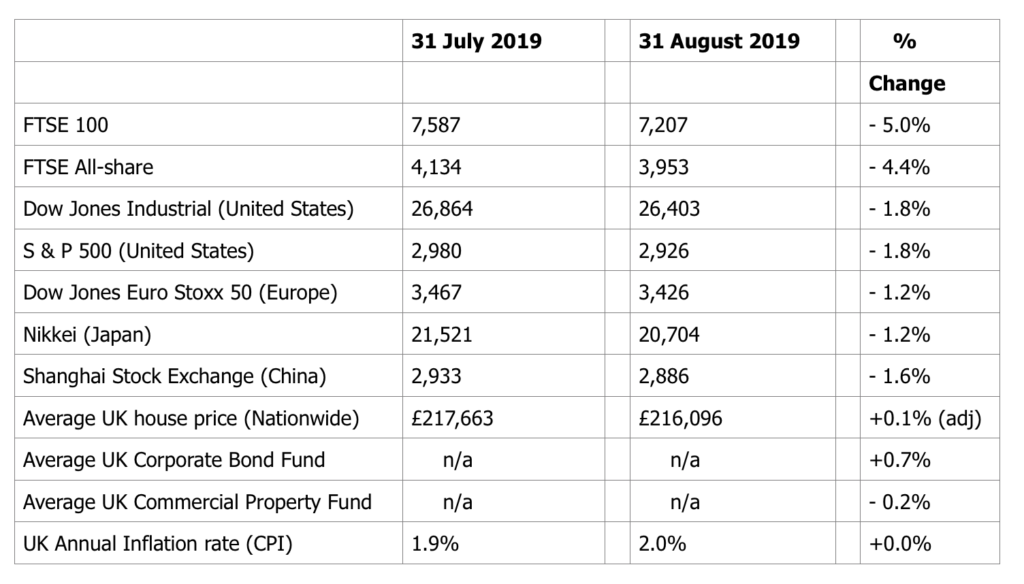 Is the world economy moving towards recession?  That’s what the stock markets (and economists and governments) are seriously questioning right now. There are many “red flag” warnings to be found, in key economic countries such as the United States, Germany, the United Kingdom, and even growth countries like China are looking at the risk of a significant slowdown in growth.

Why is this, and what can be done?  Well, we’ve discussed the trade wars between the US and China many times before in this newsletter, but President Trump’s decision to ramp up tariffs on Chinese imports early in August caught everyone by surprise and sent markets sharply down. As is often Mr Trump’s style, a little later he returned to the matter in more conciliatory tones, and markets improved towards the end of the month, but were still down overall. The fact remains that the American government believes China plays the currency markets to assist its own exporters, at the expense of American jobs (I actually think they have a point). But the fact also remains that despite the ratcheting up of tariffs between the countries (not just threats, but actual new tariffs do now physically apply), there has been no real meeting of minds and a free trade agreement between the two largest economies in the world still looks a long way off.

There is also the usual problem of natural cyclical movements of economies – the tendency of boom and bust, if you like.  In a weak economy, central banks lower interest rates, governments may kick-start public spending (if they want to use the Keynesian  model) and wages tend to fall or stay low as jobs are scarce.  Economic recovery then takes effect, and unemployment falls, wages rise, the economy grows and interest rates are then increased, so as to stop the economy overheating – as this would inevitably lead to inflation (as businesses and individuals try to ask higher prices and wages in the good times).  But interest rate rises are often overplayed, causing reduced demand from people and companies, the economy slows, and moves into recession.  So central banks then lower interest rates, governments may kick-start public spending etc….and the cycle goes round and around.

The US economy has been in a growth period since 2009 – the longest unbroken period of growth since records began (which was before the American Civil War).  At some point, inevitably, this run will have to break.  But is it now?  Well, the potential is there.  Trade wars, nervous US consumers and the various interest rate rises of 2018 are all signs of potential recession – particularly if the interest rate rises are, as so often, overdone.

However, this long innings may yet stretch further.  Jerome Powell, head of the US Federal Reserve, is now frantically rowing back on his previous words about raising US interest rates.  The first cut was made a couple of months ago, and markets are pricing in 4 more ¼% cuts over the next year.  Whereas last year the fear was inflation coming back, now it’s all about keeping the economy growing.  If the US can keep this see-saw level for a while longer, then recession may be avoided.

But, beware.  It’s not that simple.  Whilst the adage that if America sneezes the rest of the world catches a cold is still true, we are all increasingly reliant on Chinese growth.  If that slows significantly, so will the American economy, and then the UK and Europe in turn.  The economic baton is being passed on to China.

I have tried, so far as possible, to avoid the “B” word, when discussing the UK.  That’s because the commentary and events around Brexit – so far – are so often for political reasons, rather than economic (even if dressed up as economic reasons).  And the whole matter has become so polarised it’s hard to find any evidence or predictions that are free from bias or agendas – on either side of the debate.  Nevertheless, I think it’s axiomatic to say that the long-running uncertainty and political shenanigans we’re now seeing in Parliament (on all sides) is going to hinder the UK economy until some semblance of order and clarity is restored.  The Pound is at its weakest for 34 years (which has both benefits and drawbacks), business and individuals have no real idea what’s going to happen next – how could they when the politicians themselves don’t know?  This newsletter has no views on whether Brexit will improve or hinder the UK economy in the longer term, but the current impasse, with virtually no other issue being considered by politicians, is helping nobody.

But it’s not just the UK.  German manufacturing figures, and many other parts of their data, are looking dire.  My own view is that the post-war “German miracle” has neared its end.  The after-effects of Reunification of the two halves of Germany still linger on, after almost 30 years.  Asian exporters are nibbling away at German markets and whilst I’m sure Germany will continue to do quite well in the long term, it’s current place in the world export pecking order, and the way it goes about its business will, I’m sure, need to change in the decade ahead.  The German economy will need to adopt to the new world but in the meantime, the Euroland economy is looking very sluggish too, and remains very reliant on the struggling German economy.

I’ve said before – US equities look expensive, so be careful there, particularly the technology stocks, where Price/Earnings ratios look too high for my liking.  Interestingly, UK shares look quite cheap – but they would do in the current circumstances wouldn’t they?  Perhaps they will do well, as and when our laudable politicians finally get themselves sorted out?

Where we are seeing gains is in the Fixed Interest / Bond area.  With interest rates now falling in many regions, current Bonds (whether issued by companies or governments) which have higher ongoing interest payments (because they were issued when rates were higher) become more valuable.  Remember, existing Bonds can be bought and sold on the open market, and the value of the income stream changes depending on whether new issues offer higher or lower rates than the Bonds already in existence.  Inflation is the enemy of Bonds, because the official response to inflation is normally to raise inflation – thus reducing the value of existing Fixed Interest Bonds. But recession fears are currently higher than inflation worries, so rates are going to go lower – and the capital value of existing Bonds will therefore rise.

That said, we’ve seen UK index-linked Bonds spike, because the falling Pound has led investors to think inflation will feed through to the UK as a result.  And index-linked Bonds protect against inflation – that is their promise.  I’m not sure we’ll see index-linked Bonds continue to go up as much as we’ve seen this year, but with worries about equities in general, and cash rates going even lower again, the money has to go somewhere, and Bonds are likely to be the place.

My own suspicion is that active cuts in interest rates will, mostly, keep a recession in the western world at bay for a while longer – but it will be a close run thing.  Expect one or two bigger countries to show two consecutive quarters of negative GDP growth figures – that’s the official definition of a recession.  Whether that includes the UK or not – time will tell.