Posted at 13:40h in Investment Markets News by Stuart

October was a very good month for equity markets, with Eastern markets in particular doing very well.  The S & P 500 in the United States made a 2.1% gain and achieved record highs towards the end of the month.  The Pound rallied 5% and 2.9% against the Dollar and Euro respectively, as markets considered that the risk of a no-deal Brexit had diminished.  This rally in sterling meant that the FTSE All-Share, with approximately 70% of its revenue coming from abroad, was one of the weakest performing equity markets, falling 1.7% over the month.

The US – China trade war pendulum, which has been swinging between escalating tensions and a more constructive outlook, swung back towards the positive in the latter part of October, with the announcement of what President Trump has called a “Phase One Trade Deal” .  The deal involves China committing to significantly increased purchase of US Agricultural products, accelerate the opening up of its financial sector and more transparency regarding the currency markets.  The latter issue has been a constant bug-bear in American policy, and in particular the Trump administration, with the Americans believing that the Chinese Authorities deliberately devalue the Chinese currency to make their exports more competitive against their US counterparts.

However, do bear in mind that we have seen “breakthroughs” in trade talks on numerous occasions in the past, only for an irate Tweet to be issued from The White House late in an evening, and sending the negotiations, and markets, back to square one.

US Markets were also cheered by the third interest rate cut this year by the Federal Reserve as the screeching u-turn in interest rate policy in the United States continues apace.  Given the sluggish performance of the UK economy in 2019, it would not surprise me if the Monetary Policy Committee over here also made a decision to cut interest rates by a quarter percent in the next few months – obviously dependent upon General Election results etc.

Perhaps to the surprise of some, 2019 has proven an excellent year so far for equity investments.  The table below demonstrates:- 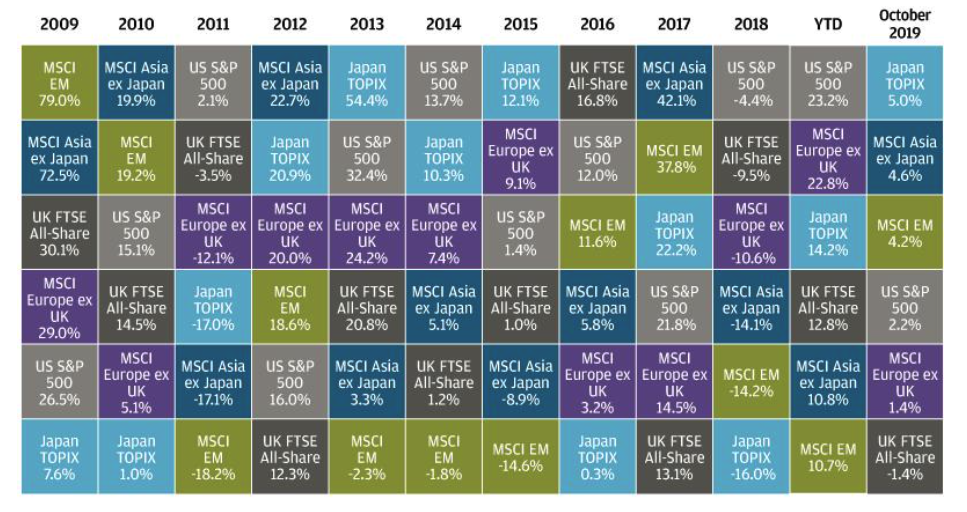 These positive figures do mask the slowing down from the global economic growth rates that we have seen over the last decade.  Political and economic risks abound throughout the World – although of course they always do. Given our own political issues here – uncertainty over Brexit and now a General Election – it is easy for UK investors to view the markets in a slightly insular manner.  I again remind readers to remember that we are in a global economy and that a well-diversified portfolio will include a mixture of asset classes, from around the Globe.

Criminal activity has changed significantly in recent years.  Less often do organised gangs make physical break-ins to steal property and cash.  Increasingly often, online scams and frauds proliferate, often from abroad.  A particularly increasing fraud has involved tricking individuals out of their pension pots, causing real hardship and upset at what sometimes is a complete loss of lifetime savings.

As ever, the authorities are always having to play catch-up against criminal activity.  However, some action was made earlier this year and as a result of new legislation cold calling anybody about their pension schemes is now illegal.  If you are telephoned about such a matter, and maybe including a “Free Review” of your pension arrangements, then you know the caller is acting illegally and is almost certainly a scam, designed to ultimately steal part or all of your pension pot.

Many readers may be experienced enough to instinctively realise this but if you can pass the message of the new legislation to friends and relatives, you may be helping them to avoid being tricked out of their life savings at a future date.  Illegal and scam cold calling does still continue from companies based abroad, which   cannot be legislated against.  However, anyone receiving such a call will now know that the company is based overseas or acting illegally here in the UK and all such calls should be terminated without ado.

Authorised and Regulated financial firms are registered on the Financial Conduct Authority’s website, which can be checked by the public.  It is not a particularly user friendly Register, and following criticism from MP’s, the FCA has promised to improve its usability.

In the meantime, anybody wanting to check on the bone-fides of a financial advice firm or other financial organisation, should check the Register or indeed feel free to call us to discuss the matter further.