Posted at 15:00h in Investment Markets News by Stuart 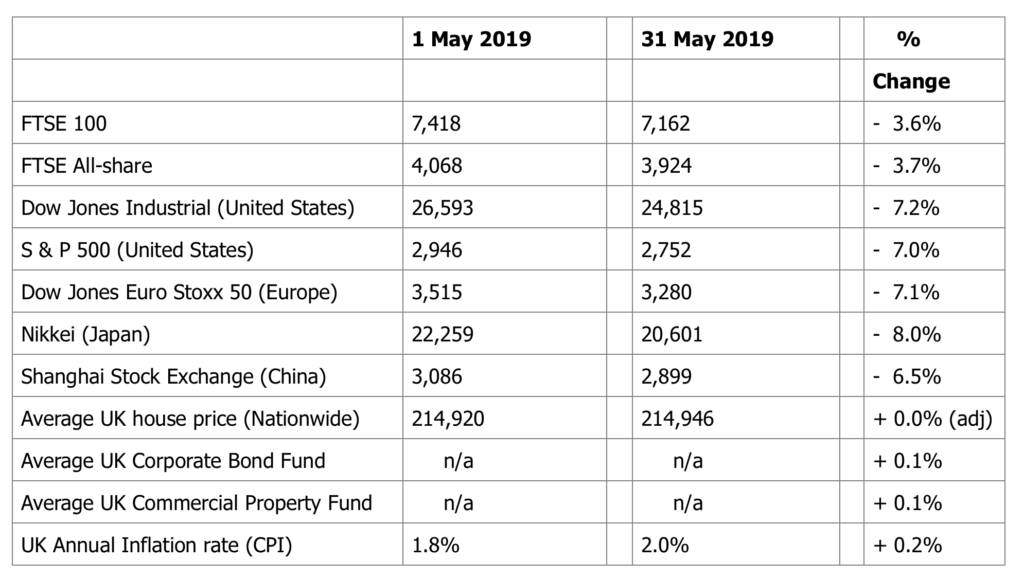 Over the last three years, I have been asked on many occasions how the stock market is being affected by the Brexit decision and subsequent negotiations.  In truth, it is the currency markets that have been, and continue to be, affected by the referendum result.  The pound remains around 10%-15% down against the basket of world currencies compared to its previous pre-referendum value.  However, the stock markets themselves, whether we talk about the FTSE 100 (where two thirds of profits are earned overseas anyway) or the wider FTSE 250 or FTSE All-share indexes have moved along in accordance with other major markets and world events, largely uncorrelated to the seemingly never ending negotiations.

Quite simply, there is one elephant in the room right now, affecting UK stock markets (and those across the globe).  This elephant is all about trade negotiations between the United States and China.  Presidents Trump and Xi respectively say they are keen to negotiate free trade between their countries but there remains many sticking points and points of conflict.  In short, when the negotiations appear to be going well then stock markets have been rising quite sharply.  Conversely, when the talks get tough, stock markets fall.  An excellent example was that during May, President Trump sent out a negative tweet about the Chinese trade negotiations at around midnight UK time.  By breakfast, the Chinese stock market had fallen by 5% and European markets were in the Red also as a result.  Not only is the potential impact of a simple tweet these days quite alarming, but it does show what the stock markets are primarily concerned about.  In all truth, although the UK media discusses Brexit incessantly, most of the rest of the world regard it as a local issue and one that will make little difference to the global economy in the longer run.

Of course, should the UK exit the European Union at the end of October without any deal or real plans in place, there could be reactions on the UK stock market and those in Europe also.   However, I do not imagine it would make significant dents in markets such as the United States, China, Japan, Australia, India etc.

The fact is that major twenty first century investments are now on a global scale and, for the time being at least, are dominated by the United States and China.  Given the complete uncertainty and confusion over Brexit over the last three years, I fail to see how any investor can reasonably make realistic assumptions and decisions based on that issue.  Perhaps it is for that reason that professional investors, fund managers and the stock markets themselves have largely put that matter to one side and carried on regardless.

As you can see from the table above, May 2019 was a very difficult one for equity markets throughout the world, all but wiping out many of the gains seen in the first part of the year.  These disappointing figures are due almost entirely on the acrimonious tones that the talks between the Chinese and Americans have taken, with tariffs now coming into play between the two countries, with the risk of further tariff increases in the coming months should relations and decisions not improve.

To add to the risks for equities, President Trump then announced that Tariffs would be applied on Mexican imports from as soon as 10 June, if the Mexican Government failed to deal with illegal immigration into the United States.  This has had the effect of pushing stock prices, including here in the UK, down another step.

It seems such a long time ago that the US was raising interest rates in order to “normalise” their levels; given these risks now being brought in, which could even lead to a recession in the United States (and subsequent global downturn) then it is not inconceivable that the US Fed the may reverse its policy and start to reduce  United States interest rates again – which would certainly help their stock markets.  In summary, the short term risks to equity investors has very little indeed to do with Brexit.  To paraphrase the Bill Clinton campaign slogan.  “It’s the Trade Wars, Stupid”.

The Markets in Financial Instruments Directive (MiFID) was brought in by the European Union in November 2007.  Updated laws, known as MiFID II came into effect in January 2018.  There is a significant amount of law within that directive but there is one element which “retail investors” (i.e. most personal investors) will quickly notice.

From this year, investors have to receive annual notification of the costs and charges that have gone into their investment products.  These statements have started to come out and we have received several telephone calls about them.

On the whole, many statements have been very clear and concise.  A few have served to confuse and I suspect that they will be improved upon by the time they are issued again next year.

In short however there are three or four main elements to investment costs and these are being identified in the new tables and summaries.  They are :-

The principle is that each party involved adds value and service to the overall investment proposition and outcome.  Clearly, the reminder of those costs being incurred is designed to encourage the various parties to ensure that they match those expectations and for the end investor to be able to judge for themselves whether they are getting value for those costs.

It is interesting to note that the highest costs being shown on many summaries is from the Investment Fund companies themselves, with charges typically in excess of 1% per annum, sometimes rather more.  Cheaper alternatives are certainly available, including the use of Tracker/Passive funds or Exchange Traded Funds (ETFs).  This then opens up the perennial discussion about Active versus Passive investments and whether an Active fund manager can beat the market average consistently enough to make their extra fees value for money.

Please do look out for these summaries that you will be sent in due course and if you have any questions or would like to discuss them I would be very pleased to take you through them in detail.  It is my belief that, over the longer term, the pressure being brought to bear on the investment industry as a whole and the fund management companies in particular will bring some price pressure to bear and investment costs are likely to reduce over the long term.  Certainly when we review our recommended portfolios, the charges are an element that we take into consideration and with this new transparency that element of the job has become a whole lot easier to understand and quantify.