Posted at 14:52h in Investment Markets News by Stuart 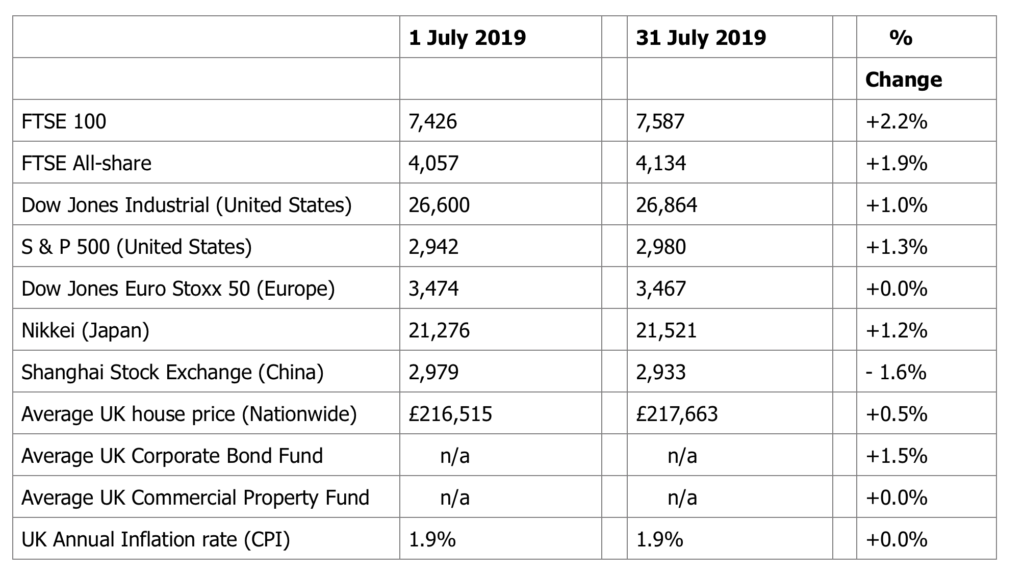 World markets continued their 2019 revival during July. The UK FTSE 100 touched 7,600 again for the first time since last year. UK investors have also benefited from overseas Equities which, in addition to the recent recovery, has been bolstered in sterling terms due to the weakness of the Pound.

I have mentioned before the uncertainty of Brexit and the possibility of a ‘no deal’ exit on 31 October is intensifying the pressure on the Pound. If things continue as they are then we could well see the Pound fall to its lowest level for almost forty years. This has the effect of making our exports more attractive to the rest of the world but, conversely, it makes imports more expensive. As a result, a falling Pound is an inflationary event.

That said, there continues to be very little general pressure on inflation at the moment and wage growth has exceeded inflation over the last year or so, so that in real terms, the average family is slightly better off than last year (although the distribution of that growth is very uneven).

At the end of July, the previously unthinkable happened. As I had suggested in our June newsletter, the US Fed took firm action and reduced the key US interest rate from 2.5%  down to 2.25%. In my view this is significant, not least because previously the indications were that the Fed would look to ‘normalise’ interest rates at 3% or more. However, this reversal of policy is a good demonstration of the weakness of the US economy and potentially the global economy as a whole. President Trump’s intermittent tweets picking fights with (and imposing tariffs on) the Chinese is not helpful to the prospects of the global economy of course. Here in the UK, the Governor of the Bank of England, Mark Carney, has indicated that interest rates could be cut should we leave the European Union without a deal on Halloween. Speaking personally, I find it hard to know quite how anyone can plan or anticipate events given the total uncertainty and the dichotomy between the Government and the UK parliament as a whole. Maybe things will become clearer in the next month or two?

In the meantime, the big beneficiary of this new trend in falling interest rates is Corporate and Government Bonds. Commentators, including myself, have for several years been pointing out the relatively expensive price of bonds and the risk of a fall in capital values should interest rates rise sharply. For years, the markets have continued to defy those predictions. It now seems that the long delay in those predictions coming true will be extended for a further time. The odd thing about stock markets (and bond markets to some extent) is that bad news can often be treated as good. Remember, stock markets are always looking twelve months or so ahead and so they see near term economic problems, which lead to cuts in interest rates as being good news in the sense that those interest rate cuts will stimulate the economy by making business borrowing less expensive and potentially boosting economic growth. If global growth is slowing – and European countries such as Germany and Italy look very vulnerable – then a further period of low interest rates looks quite likely.

Jargon Buster –  Pensions: A Dashboard and MAPS to help you plan your route

Financial matters can be complex. It is acknowledged that financial education amongst the UK population as a whole (although not our readership of course!) is woefully below what is needed for people to make good financial decisions throughout their life.

One of the key areas in which many people have far less understanding and knowledge than they ought to is their future pension provision. In fairness to those people, the pension system has been incredibly complicated for decades, not helped by changing legislation as well as differing work patterns these days and so forth. Many people have Final Salary related benefits from the past, some private pension provision, Work Place pension schemes that create a pot of money and, of course, the State Pension benefits – which at all times is merely a promise for the future by the Government and in which we have seen many changes, including increasing the retirement age from time to time. No wonder so many people are confused and have a fairly poor idea of how much pension they may receive in the future.

To try to assist, the government is now legislating for a Pensions Dashboard. This will be a single platform or website where people can view all of their pension benefits that they have accrued to date, including the State Pension. Whilst this is an excellent idea, it is undoubtedly a very complex one. Whilst, for instance, modern private pension plans which are valued on a daily basis can have its details shown easily, it may be far harder for Final Salary pension schemes which have been closed for future accrual, to be able to produce information for all their members on a regular enough basis and feed that through to the Dashboard. Nevertheless, the law will enforce them to so do.

We are also relying on the governments technology being able to produce accurate State Pension forecasts to provide the full picture for people. And a further consideration of course is privacy and data protection. Multiple sources of important financial information being fed through to a single dashboard could be a magnet for hackers and data security will be a key aspect. Nevertheless, the aim is for this dashboard to be up and running within the next three to four years. My fear is that it will be brought in on a rather piecemeal basis and people may be somewhat put off if, having viewed the dashboard, they find only the more recent information on there (which they were already aware of and could get easily beforehand anyway) whilst the older schemes, which may have been forgotten about or poorly understood, are not being shown. Nevertheless, with over £400,000,000 of pension benefits being unclaimed each year, this does seem a sensible idea and indeed could save the pensions industry considerable sums of money if information on people’s accrued pension benefits are more easily available in one place.

On a different, but related matter, we have also had the Government now announce the new Money And Pensions Service (MAPS). This replaces and incorporates the Money Advice Service (MAS), Pensions Advice Service (PAS) and Pension Wise all into one single body. The Government spent hundreds of millions of pounds – of their own money and the financial industry’s money promoting the Money Advice Service and you may remember the adverts on television (or probably not). There was, undoubtedly, enormous waste and excess in the manner in  which the three previous bodies had been established and I think streamlining them into a single service for the general public is a very good idea. The Government has also deliberately chosen a name which avoids the word ‘advice’ in its name. This is because MAPS will provide financial ‘guidance’ i.e. explains the options open to individuals regarding pensions or any other financial matters. It does not provide financial ‘advice’, as this is a Regulated activity for which both qualifications are needed and consumer protection is provided.

The task of bringing financial literacy and education amongst the UK population as a whole up to a higher standard is a long term and difficult task. The majority of the public do not have the benefit of financial advisers to assist. Whilst I can see the shortfalls of the new proposals, I do welcome the aims of the Pensions Dashboard and hope that it works well in the future and that people without financial advisers will begin to understand that there is a guidance system to at least start them off on their process of financial planning, through MAPS, which may in turn lead them to take personalised financial advice after that.